People often get confused when looking at the Docker architecture at what the various components do. In this article I will attempt to demystify a few components. The latest docker version when writing this article is 18.09.
Here’s an overall hierarchy of Docker 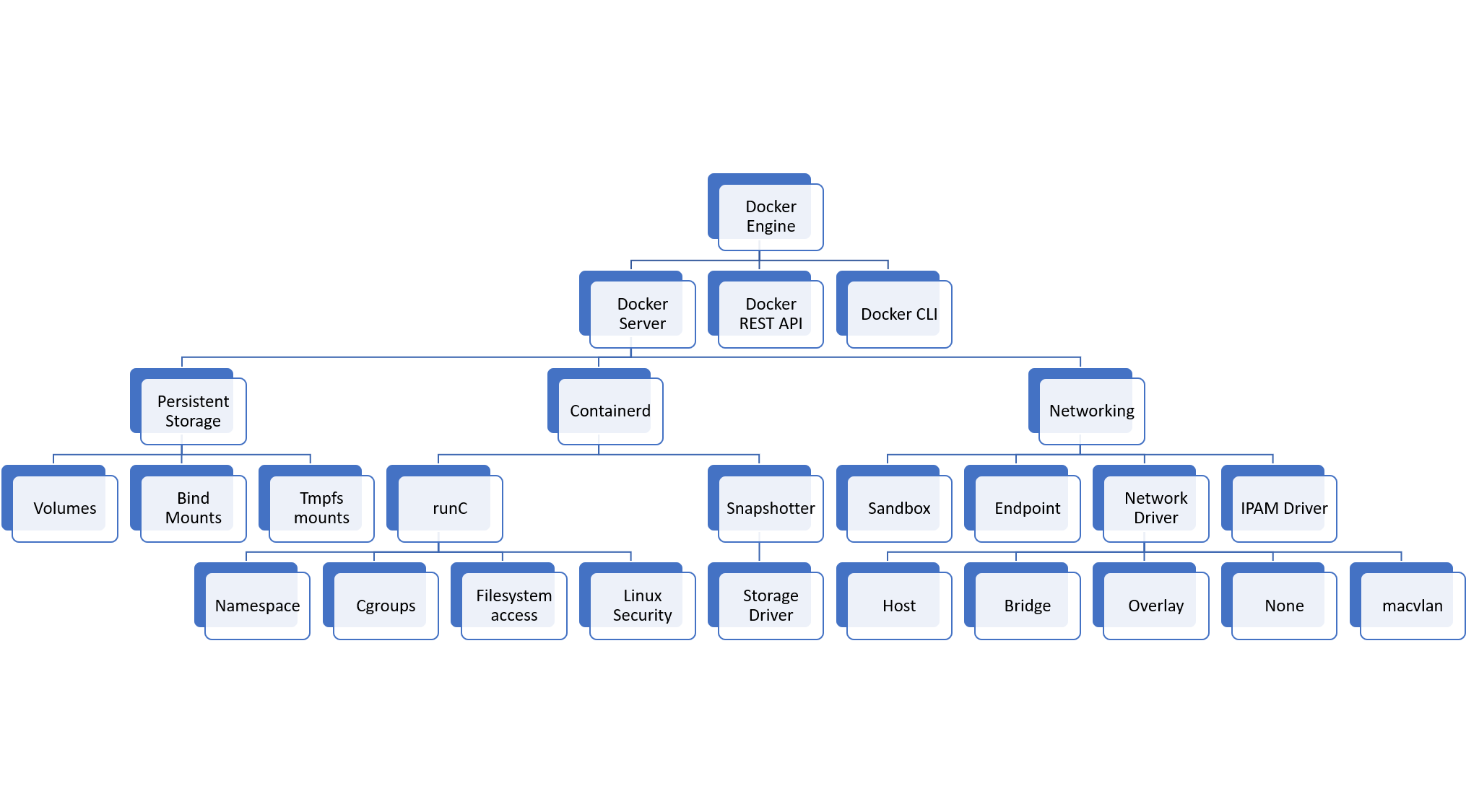 The heart of Docker is the docker engine.

The Docker Engine consists of

The file system in docker is managed by the container runtime and it uses a storage driver to write to the containers writable layer. However to persist data outside the container there are three options – volumes, bind mounts and tmpfs mounts.

The Docker server take care of maintaining volumes and they are managed using the api or the client. They can be shared amongst multiple containers and work on both linux, windows or event remote hosts or cloud providers. The volumes are created on the host but managed by docker and its life is independent of the lifecycle of the container. A volume can be mounted onto multiple containers and also on remote hosts or cloud providers using volume drivers.

You can mount a file or directory from the host machine to the docker container using bind mounts. They are limited in functionality compared to volumes and use the complete file path of the host system. Volumes are preferable to bind mounts for new applications.

This can be used to store temporary data since the data is not persisted on disk but is kept on the temporary storage area of the host machine.

The diagram below from the docker documentation for networks explains how networking in docker works.

This is the network for the container itself. It manages the containers routing tables, interfaces and DNS settings.

Endpoints join a sandbox to a network. Their main goal is to abstract the driver implementation.

The heart of the container system is containerd. It is the container runtime that the docker engine uses to create and manage containers. It abstracts away calls to system or OS specific functionality to run containers on windows, solaris and other operating systems. The scope of containerd includes the following

containerd is scoped to a single host. In this article we will discuss two core features – snapshotter and runtime.

Docker containers use a system known as layers. Layers allow making modifications to a file system and storing them as a changeset on the top of a base layer. Docker earlier used graphdriver for taking snapshots, however containerd uses the snapshotter.

All containers use the same base layers. If a layer needs changes, then a new layer is created as a copy of that layer (and all layers on top of it) and additional changes are added to that new layer. These new layers are visible to the container that requested those changes and the other containers can still use the original layer. If you check out two images from the docker repository and if the two images have common base layers then docker will download those common layers only once.

There are different drivers that accomplish this functionality. Docker uses a pluggable strategy so that the storage drivers can be changed. The storage drivers supported are overlay2, aufs(used by older versions), devicemapper (older CentOS and RHEL kernel versions), btrfs and zfs if the hosts use them and vfs for testing.

As the diagram shows, the user sends commands to the docker server using the command client client also know as docker. The command is received by the Docker RESTful API which in turn instructs the daemon to perform tasks. To see a list of commands the the command line runs type in docker help.

This finishes our introduction to the Docker architecture.

Install Minikube and Docker with VirtualBox on Windows 10 Home

This site uses Akismet to reduce spam. Learn how your comment data is processed.